Okay, so the fact that Sammy and Raffy aren't returning wasn't exactly a newsflash, but I just checked out the Sun article referred to in the O's.com article, and I found this little tidbit far more interesting...

One intriguing possibility is Garciaparra, a former All-Star shortstop who has battled injuries.

Flanagan said he has not had specific discussions about Garciaparra and the Orioles, "but we have been told he'd be willing to try other positions."

One American League observer believes Garciaparra could be a solid defensive first baseman.

Nomar, an O? That's an interesting idea. Ok, now I'll admit I believe I was quoted two or three years ago as saying "If I had to watch that man tug on his batting gloves every day I'd kill myself!", but he was with the Red Sox then. He might be a nice addition... Does anybody (Sara, our resident Cub fan?) know how he did last year after returning from his injury?

Happy Birthday To You,

Happy Birthday To You,

Happy Birthday To You!

Need a good laugh? Brace yourself... 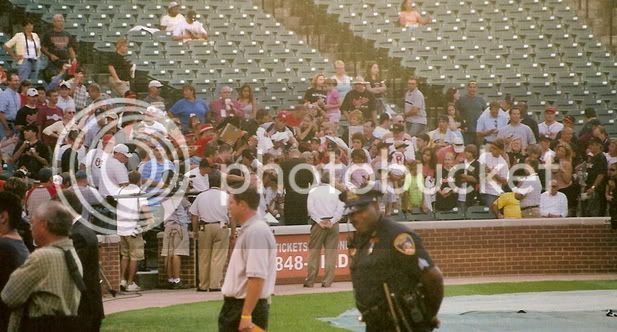 Cal signs autographs for the masses.

Cal meets with some kids who were born in 1995, the year he broke Lou Gehrig's record.

The Ripken clan, from behind. From left to right: brother Fred, sister Elly, brother Bill, momma Vi, (son Ryan's there but you can't see him), daughter Rachel, Jim Hunter, Cal, and wife Kelly.

Cal throws out the first pitch.

Miggy and Cal (doesn't Miggy look like a shrimp next to him?) 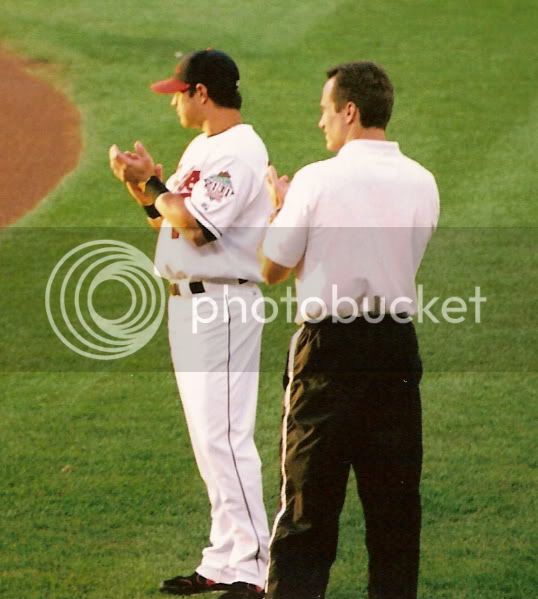 Brian says "I can't stand here all day, I've got a game to play!"

They played the video of the national anthem from September 6, 1995, which was pretty cool.

This is more a picture of Brian's hair than anything else.

I don't know this baby, but how CUTE is he?!

Middle of the fifth, the game becomes official and we recreate history...

Do you think I can convince people I was there the first time?

Oh yeah, there was a game, too! Here's the debut of the Big Guy.

BJ Ryan, Josh Towers, and Gregg Zaun (two former Birds and a future former Bird) yack it up before the game.

Brian leads it off...

...and singles! (the first of three on the day for him)

Miggy at the plate.

Jay at the plate. 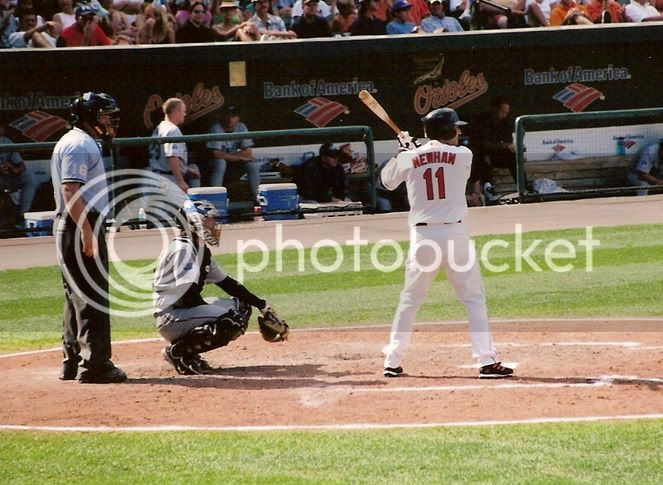 BJ. (Notice the lack of photos of baserunners!)

Brian looks in the dugout and says "Can you believe he called THAT a strike?!"

RoLo and his 'do during "God Bless America."

Geena Davis, as the President of The United States, throwing out the first pitch. 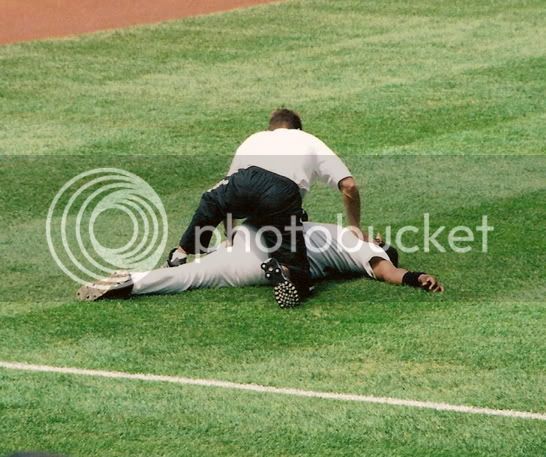 That's all for now!

Here's the cover of the new Outside Pitch, for anyone who hasn't seen it yet: 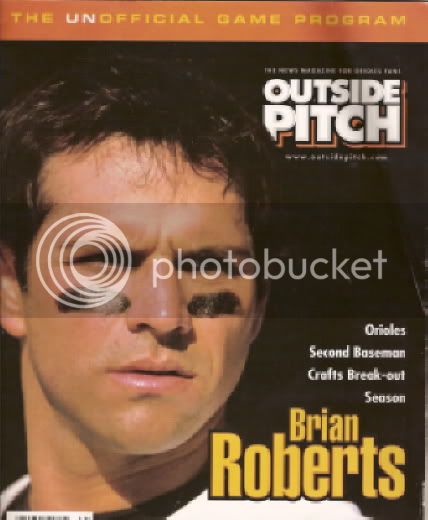 Now seriously, couldn't they find a smiling picture? Doesn't he look like he's listening to Bruce Chen try to explain how to chart pitches? "Dude, what are you talking about?"

Sure, he's leading the AL in hitting. He hits game winning homeruns to beat the Yankees. He makes amazing plays at second base. Of course he visits sick children in hospitals regularly. But this is a reminder of all the other reasons we love Brian Roberts and his scrappy, undersized, cornball, sometimes too-adorable-for-words self.

I present you with the lighter side of BRob:

I swear he's not the batboy in this picture! Maybe it was "bring your shrimpy friend to the ballpark" night!

This is from Fuji Photo Day in 2003; I just think he's got an especially cheese-bally grin on his frace; makes me giggle.

Raffy turns him into a lifesized bobblehead doll...

Pregame hoedown! Or he's about to high-kick Jorge Julio. Either way, I'm all for it!

Two of our best players, showing how cool they really are! (Either that, or this is what happens when you high-five a guy three times your size!)

Whoa, looks like it was a rough bus ride...

And finally, just for fun:

This one doesn't make me laugh so much as make me squeal with delight. Although, it does kind of look like he & Mel are about to make out. But who would blame them after a walk-off homerun to beat the Yankees to end a six game skid?

My father and I recently followed the O's on one of their roadtrips. We saw them play in Pittsburgh and Cincinnati; check out the pictures! 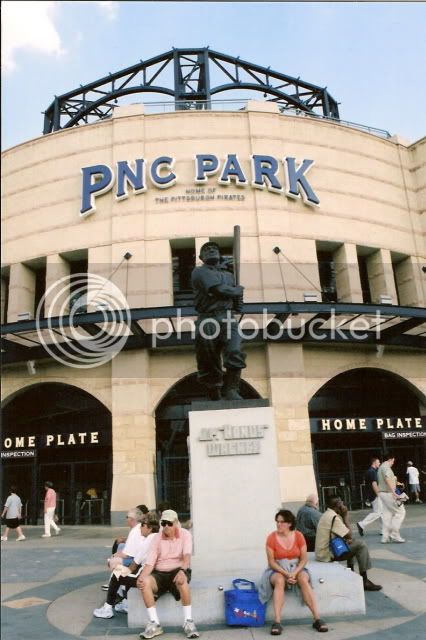 Holy Cow! It's Brian without sleeves! (This was him finishing up a workout before the game; he was still nursing his sore shoulder.)

This is Luis watching some live pitching from Rodrigo in the bullpen; he was still out with his finger injury. 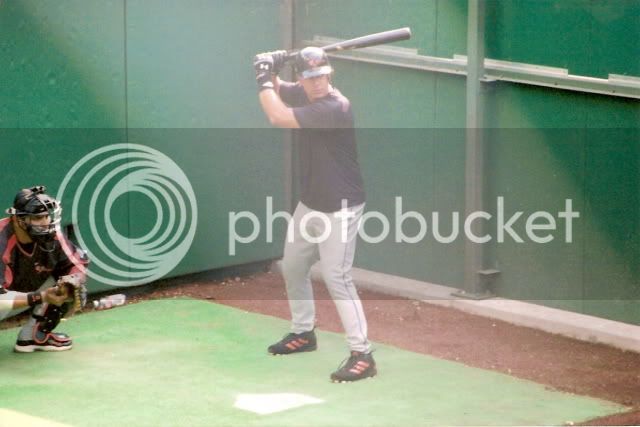 These are during batting/fielding practice before the game. Here's Kliner (and his mouth!)

BRob signs some autographs. Check it out! Glove-on-head and short pants!!

Perogie Races! (As far as the game went, this was the highlight of the night for O's fans.) 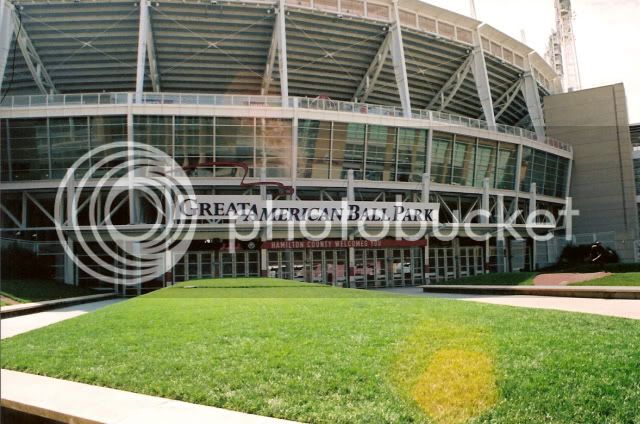 The view from the press box (this was during one of the ballpark tours.)

The view (or lack of) from the Reds' dugout:

There was no BP today, but I still got some nics shots before the game. Here's The Chief:

Ramone Nivar (we hardly knew ya!):

Excited to finally be back in the lineup, Brian Roberts dances a jig with John Parrish...

I don't what the story is with the dorky high-five BRob and BJ Ryan do before every game, but I finally got a picture of it:

As for the game, Melvin homers!